Katharine Darrow is a retired Senior Vice President of The New York Times Company. She started her 30 year career at The Times as a summer intern in the legal department and joined the department upon graduation from Columbia Law School. After serving 8 years as General Counsel, she was appointed president of the company’s Broadcasting Group. In the following years she held various additional corporate positions, including 5 years as president of the International Herald Tribune.

She has been a director of several not-for-profit organizations, including the University of Chicago, where she earned her BA, the Brooklyn Museum, Resources for Children With Special Needs (now Includenyc), and she was a founding board member and co-chair of Community Roots Charter School in Brooklyn. Katharine and her husband Peter lived abroad for several years, in London and Rome, but Brooklyn has been their home and primary residence since 1968. She joined the Foundation's Board of Directors in May 2017. 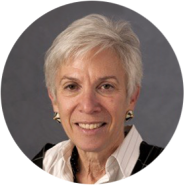