Co-Chair
Nicole Gueron is the co-founder of the law firm Clarick Gueron Reisbaum LLP. She previously served as the Deputy Chief Trial Counsel to New York State Attorney General Andrew Cuomo, directing some of the office’s largest investigations as a member of the Attorney General’s Executive Staff. She has also served as an Assistant United States Attorney for the Southern District of New York, and was awarded the national Director’s Award for Superior Performance for her work during this time.

Early in her career, Ms. Gueron was a litigation associate at Friedman, Kaplan & Seiler LLP, and served as a law clerk to the Honorable Charles S. Haight, U.S. District Judge for the Southern District of New York. She is a graduate of Harvard College and received her law degree from Yale Law School. She joined the Foundation's Board of Directors in September 2016. 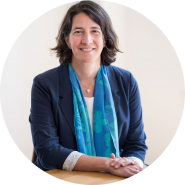