Zul Jamal is a Managing Director at Moelis & Company, an independent investment bank, which he joined in 2008. Prior to joining Moelis & Company, he was a Senior Vice President at Jefferies & Company in New York and Jefferies International in London. Mr. Jamal received a B.S. in Economics from the Wharton School of the University of Pennsylvania.

A native of the United Kingdom, he lives in Park Slope with his wife and daughter and has called New York City home for 17 years. He joined the Foundation's Board of Directors in February 2018. 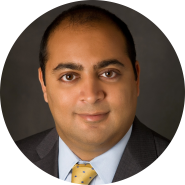