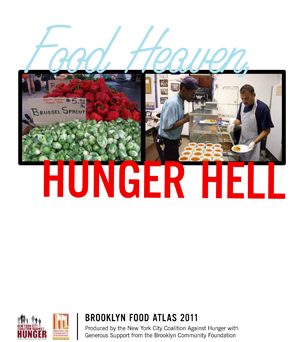 Produced by the New York City Coalition Against Hunger with funding from the Brooklyn Community Foundation, the Atlas is entitled “Food Heaven, Hunger Hell,” to denote the paradox under which Brooklyn is both a world capital for high-end food products and the part of New York City with the greatest number of residents suffering from hunger and food insecurity.

“We are surely living through a ‘Tale of Two Brooklyns’,” said Joel Berg, executive director of the New York City Coalition Against Hunger. “Poverty and wealth divide Brooklyn thoroughly, and that division plays itself out thoroughly in the vast differentiations regarding access to food. The charts and maps in this Atlas powerfully demonstrate that divide.”

The New York City Coalition Against Hunger is the voice for the more than 1,200 nonprofit soup kitchens and food pantries in New York City and the more than 1.4 million low-income New Yorkers who live in homes that can’t afford enough food. The coalition works not only to meet these residents’ immediate food needs but also to enact innovative solutions to help society move “beyond the soup kitchen” to ensure economic and food self-sufficiency for all Americans.

“In the most progressive city in the world’s wealthiest nation, there is simply no excuse for anyone not getting enough healthy, nourishing food. Yet each year, millions of New Yorkers have trouble paying for the food they need and rely on soup kitchens and food pantries—a problem we feel acutely in Brooklyn, with nearly a third of the city’s emergency food programs based in our borough. My office has long advocated for food justice and better access to supermarkets and fresh, nutritious foods in our most underserved neighborhoods, and I applaud Joel Berg and the New York City Coalition Against Hunger as well as the Brooklyn Community Foundation and Marilyn Gelber for compiling this indispensible guide to food resources in Brooklyn.”

The Atlas indicates that an estimated 467,000 Brooklyn residents–more than one in five people who live in the borough–suffer from hunger or live at the brink of hunger, unable to afford enough food, sometime during the year. Hundreds of thousands of Brooklynites are forced to rely on more than 340 food pantries and soup kitchens in the borough. Fully 685,291 borough residents, about half of whom are children, receive food stamp benefits. On the positive side, the Atlas shows the borough also has significant numbers of farmers’ markets, food retailers, community supported agriculture (CSA) projects), and food stores.

“Often when we think of hunger the image that is evoked is not local,” said Marilyn Gelber, president of the Brooklyn Community Foundation. “Yet the truth is that hunger is a serious and widespread problem here in Brooklyn too. The Atlas’ wealth of data shows us that one in five Brooklynites lives in a home unable to purchase sufficient amounts of food at some point during the year, and highlights the vast ‘food deserts’ throughout our borough, where fresh, nutritious, affordable food is scarce. With this resource and the help of strong organizations like NYCCAH, we are committed to leading a frontline fight against hunger in Brooklyn”.