The feelings, the food, the people were All Good at last night’s first-ever “Brooklyn Does Good,” a celebration that marked the first anniversary of the Brooklyn Community Foundation and the culmination of the inaugural Brooklyn Do Gooder Awards campaign. Emceed by WNYC’s Leonard Lopate and WNBC’s Cat Greenleaf, nearly 300 people attended the ceremony which honored six “Do Gooders” whose works include everything from growing food for the hungry, to fighting pollution, to helping children of imprisoned parents, to teaching music to young people, to planning community events, to helping promote civic engagement among new and long-time Brooklyn residents. Awardees were selected by a panel of judges from among 20 finalists who garnered the most on-line votes for their selfless charitable work for the betterment of Brooklyn. All Brooklyn Do
Gooder Awardees received $5,000 to reinvest in his or her Brooklyn charity(s) of choice, and handcrafted awards  from Brooklyn’s Urban Glass workshop. A special “Founders” award was also presented to Charles J. Hamm, former CEO of Independence Community Bank which provided the funding to create Independence Community Foundation, the predecessor to today’s Brooklyn Community Foundation. The inaugural Brooklyn Do Gooder campaign, which invited the public to nominate and then vote for individuals who display an outstanding sense of giving back to Brooklyn, was launched in August online at www.DoGoodRightHere.org and generated more than 300,000 votes for more than 250 Do Gooder nominees.

“Tonight we celebrate the community of Do Gooders in Brooklyn – people who let their actions speak louder than their words; people who care more for others than for themselves, who stand up for principle and don’t accept the status quo if it means that their neighbors and their neighborhood can’t achieve more.  Tonight we recognize six individuals who became finalists in the voting and were then selected by our judging panel. But the truth is that ALL of the nominees are winners, and they should all be recognized for their generosity, their hard work and their love of the Brooklyn community,” said Marilyn Gelber, President of the Brooklyn Community Foundation in her opening remarks.

Brooklyn Do Gooder Awardees represent each of the Foundation’s five fields of interest: Arts for All, Caring Neighbors, Community Development, Education and Youth Achievement and Green Communities. 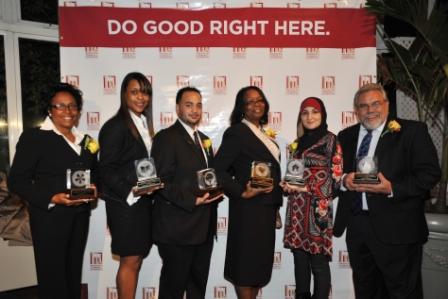 ARTS FOR ALL
Chinita Pointer, Executive Director of the Noel Pointer Foundation
Chinita Pointer, wife of the late, award-winning violinist Noel Pointer, has a vision of creating a string orchestra for children in Brooklyn and connecting them to higher education. Her work as the Executive Director of the Noel Pointer Foundation helps give youth in Central Brooklyn an opportunity to excel in the arts and beyond. The program provides young people a place to hone their craft and be surrounded by positive role models. “If we can change their lives, it’s a snowball effect,” she says.

Linda Sarsour, Co-Founder of the Arab American Association of New York
Linda Sarsour is first-generation, first-born and says she is “never leaving Brooklyn.” As co-founder of the Arab American Association of NY, this young mother of three uses her leadership skills, fluency in English and Arabic and cultural understanding to organize voter registration drives workshops and engage an under-represented community. In 2008, she coordinated the largest Get Out the Vote Effort in the history of the Arab-American community in Brooklyn.

EDUCATION AND YOUTH ACHIEVEMENT
Sharon Content, Founder, Children of Promise NYC
Sharon Content went from being an accountant to founding Children of Promise NYC, an after school program and summer day camp specifically designed to meet the mental health and social needs of children of imprisoned parents. She decided to take action after learning about the multiple challenges and needs of children in these circumstances through her work and volunteering with the Boys and Girls Club and the Osborne Foundation and hasn’t stopped.

GREEN COMMUNITIES
Murad Awawdeh, United Puerto Rican Organization of Sunset Park (UPROSE)
Murad Awawdeh is an American-born Palestinian who wants his home—Brooklyn—to be greener. When he was 10-years-old, Awawdeh walked around Sunset Park, knew he wanted a park and more trees, and set out to make it happen. He became the a founding member of the Environmental Enforcers, a cadre of young people who look out for the community’s environmental rights, and a principal organizer in a campaign to defeat a 520 megawatt power plant in the neighborhood. As an environmental justice advocate and volunteer for over thirteen years within his community and for the United Puerto Rican Organization of Sunset Park (UPROSE), he is helping green this neighborhood and make Brooklyn healthier.

ABOUT THE BROOKLYN DO GOODERS AWARDS
The first-ever Brooklyn Do Gooder campaign is a borough-wide initiative that set out to identify and honor those who embody the highest values of community giving and service. The campaign, which also celebrates the first anniversary of the Brooklyn Community Foundation since its re-launch in October 2009, invited the broader Brooklyn community to identify individuals who display an outstanding sense of giving back locally—with time, talent or charity and to nominate and to vote for them online. Nearly 300,000 votes were cast to help determine 20 finalists from among nearly 250 nominees. A panel of judges consisting of local leaders chose awardees to represent each of the Brooklyn Community Foundation’s fields of Interest: Arts for All, Caring Neighbors, Community Development, Education and Youth Achievement and Green Communities. Winners will be publicly recognized at an event on November 3 at the Brooklyn Botanic Garden, and will receive an award and $5,000 each to re-invest in the Brooklyn nonprofit community. For more information, go to:  www.DoGoodRightHere.org.

ABOUT THE BROOKLYN COMMUNITY FOUNDATION
The Brooklyn Community Foundation is a nonprofit organization dedicated to improving the lives of people in Brooklyn through grantmaking and by encouraging local giving and community service. The first and only one of its kind in Brooklyn, the Foundation was founded in 2009 to support the borough’s most effective nonprofits in five Fields of Interest: Art for All, Caring Neighbors, Community Development, Education and Youth Achievement, and Green Communities. Since 1998, operating as the Independence Community Foundation, the Foundation distributed over $70 million in grants throughout New York Metro area, more than half of which was in Brooklyn. Learn more at: www.BrooklynCommunityFoundation.org; Follow on Twitter @DoGoodBklyn.