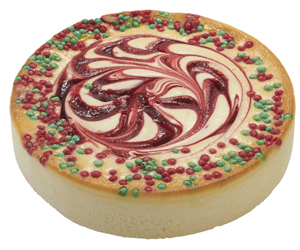 For every $34.95 purchase of Junior’s scrumptious Strawberry Swirl Holiday Cheesecake at Junior’s three New York City locations – Brooklyn, Times Square, and Grand Central Terminal – during the month of December, $5 will be donated back to the Community Foundation.

“Brooklyn has been our home for more than 60 years and our success is due to the enormous love and support we have from our friends and neighbors throughout the borough,” said Alan Rosen, the third generation of his family to own the iconic restaurant. “So, we’re honored to show our gratitude by giving back to them. But since I don’t know anything about grant-making, it makes perfect sense to use what I do know – selling cheesecakes – to help those in need.”

“As Brooklyn’s largest foundation we know something about grantmaking and we know something about Brooklyn’s best cheesecake! This partnership with Junior’s can make a difference in the lives of our neighbors who are struggling to make ends meet this holiday season,” said Brooklyn Community Foundation President Marilyn Gelber. “In this case, it’s as easy as cheesecake to “Do Good for Brooklyn.” We hope everyone who lives here, visits here, or just loves Brooklyn will take advantage of this appetizing opportunity to get a taste of Brooklyn and do an act of kindness at the same time.”

The Brooklyn Community Foundation’s mission is to improve the lives of people in Brooklyn by strengthening communities through local giving, grant-making and community service. The first and only one of its kind in Brooklyn, the Foundation was founded in 2009 to support the most effective nonprofits serving the borough. Through the generous support of its donors, this year the Community Foundation will give over $4 million to nearly 200 organizations in Brooklyn.

Junior’s Restaurant and its world-renowned cheesecake are highly acclaimed by celebrities, journalists, politicians, and foodies across the country. The eatery has been featured on many television shows, most recently appearing on and winning Food Network’s Food Feuds, hosted by Iron Chef Michael Symon, as well as on The Best Thing I Ever Ate as a favorite of Rocco DiSpirito. 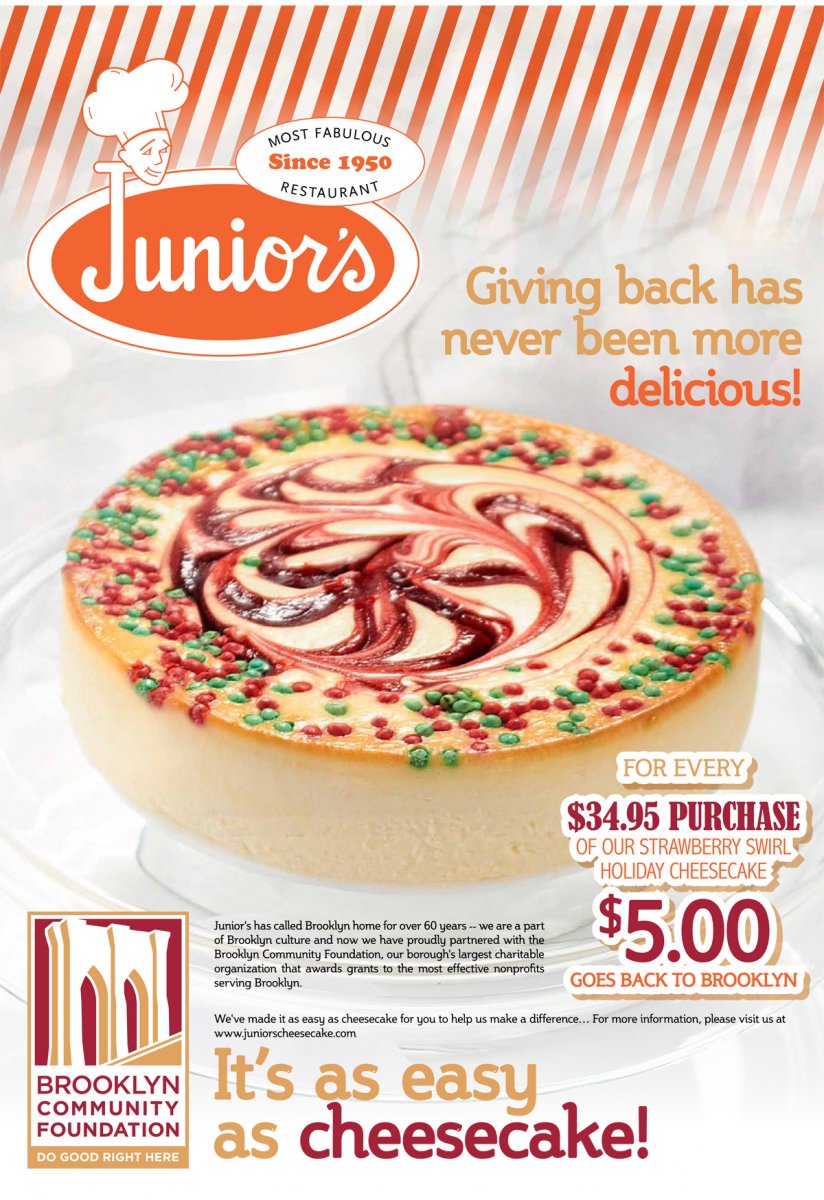 About Junior’s
Founded by Harry Rosen in 1950, Junior’s is now a third generation family-run business with grandsons Alan and Kevin at the helm. The Brooklyn institution, renowned for cheesecake so rich and creamy it makes tough men swoon, dishes its overstuffed deli sandwiches, cheeseburgers, blintzes and skyscraper desserts at the corner of Flatbush and DeKalb Aves. The 440-seat space serves 4,000 customers daily and sells approximately 5,000 cheesecakes per week, ranging in weight from 5 ounces to 5 pounds. To celebrate its 50th anniversary a second location, in Manhattan’s legendary Grand Central Terminal, opened in May 2000 to cater to the millions who travel through this famed transportation hub. In 2006, Junior’s made its Broadway debut, opening its Times Square location, and two years later, the first Junior’s outside New York – at the MGM Grand at Foxwoods in Connecticut – opened. Junior’s bakery operation now churns out more than 1 million cheesecakes per year, which equals 10 million slices of cheesecake. More than 2,000 cheesecakes are sold per week via mail order (1-800-9-Juniors), and Junior’s World Famous Cheesecake is currently the #1 selling food product from New York on the QVC Shopping Network. In March of 1999, Mayor Rudolph Giuliani honored the founder, who passed away in 1995 at the age of 92, by renaming DeKalb and Flatbush Avenues Harry Rosen Way-Cheesecake Corner. Over the years, a cavalcade of actors, politicians, athletes and royalty have savored Junior’s cheesecake. For more information, visit www.juniorscheesecake.com.

About the Brooklyn Community Foundation
Improving the lives of people in Brooklyn and strengthening communities through local giving, grantmaking and community service. The Brooklyn Community Foundation was founded in 2009 to support the borough's most effective nonprofits in five Field of Interest Funds: Arts for All, Caring Neighbors, Community Development, Education and Youth Achievement, and Green Communities. Thanks to legacy operating support from Independence Bank, 100% of all tax-deductible donations to the Foundation go directly back to the community. For more information, visit www.brooklyncommunityfoundation.org.