For Brooklynites—the 2.5 million residents of what would be the United States’ fourth largest city, stretching across an 71.5 square mile checkerboard of distinctive and diverse neighborhoods—there is now a new resource for accessing comprehensive hyper-local data about the communities they call home.

Today, the Brooklyn Community Foundation, the largest charitable fund in New York City’s most populous borough, and its research partner, the Center for the Study of Brooklyn at Brooklyn College, issued the first official publications of their Brooklyn Trends information initiative. The more than 600 pages of the Brooklyn Neighborhood Reports present civic data profiles of Brooklyn’s 18 Community Districts, as well a Brooklyn-wide report. With critical information from the U.S. Census and other sources, each report covers nine theme areas and explores over 90 indicators of civic health.

Reports are available to view and download on the Center’s website at www.studybrooklyn.org under “What’s New” or at http://bit.ly/yjtYN8. 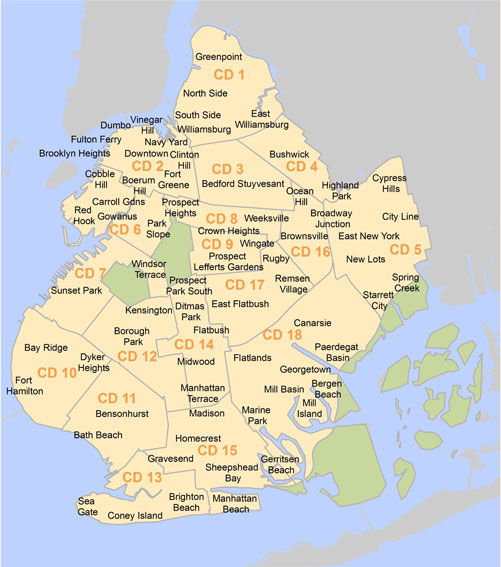 “Too often, stats about Brooklyn get submerged in citywide stats that miss important local trends,” said Brooklyn Community Foundation President Marilyn Gelber. “As we consider the data from across our distinct communities from Williamsburg and Bay Ridge to Park Slope and Brownsville, we begin to identify developments and disparities that confirm our progress, but also our challenges, and reveal the impact of new residents—not just former Manhattanites and the latest generation of creative young people, but an ever increasing number of striving immigrants from China, Mexico, Jamaica, and Haiti. We hope these Brooklyn data will not only be useful in helping grantmakers, non-profits, the business community, and public officials in their planning, but more importantly, we hope they will empower and inspire all Brooklynites to take on local challenges and create positive change from the ground up.”

Started in 2005 with funds from the Brooklyn Community Foundation (then Independence Foundation) and investment from Brooklyn College, the Center for the Study of Brooklyn is the first and only research center devoted exclusively to the study of public affairs in Brooklyn. In 2009, as part of its transition to a community foundation and in the midst of great growth in the borough, the Brooklyn Community Foundation identified a need for dedicated research into the type of statistical trend data that a “city” of 2.5 million would typically have, and commissioned the Center to develop a series of reports as part of a new joint information initiative.

The Brooklyn Neighborhood Reports are now available to support data-driven public policy, programming, and funding decisions that impact Brooklyn’s 18 Community Districts. The first-ever Brooklyn Trends Report will also be published in 2012 by the Center for the Study of Brooklyn and the Brooklyn Community Foundation, and will provide a more in-depth examination of borough-wide and neighborhood data for the nine aforementioned theme areas.

“Brooklyn has experienced a great deal of growth and investment, and it would be easy to say that we’re doing a lot better than ten or twenty years ago,” added Center for the Study of Brooklyn Director Gretchen Maneval. “However, in order to have the most accurate understanding of the changes in Brooklyn, it’s essential that in addition to celebrating and building upon our obvious successes, we also look beyond borough-wide numbers and consider what the data at the Community District level reveal—what’s going well, and what we still need to improve upon. It’s also imperative that in addition to considering the community-level data, we hear from those who actually live and work in Brooklyn’s neighborhoods about their experiences and their perspectives—they are the experts and ambassadors of change—the Center and the Brooklyn Community Foundation are merely the facilitators of this inquiry and dialogue.”

• Brooklyn’s population has increased by over 10% since 1990.
• Brooklyn is twice as diverse as the rest of the country, with over 180 ethnicities and more than 60% of the borough claiming a Black, Latino or Asian racial/ethnic category.
• Only 54% of Brooklyn households speak English as their primary language.
• The percentage of Brooklynites who don’t speak English well or at all has increased by almost 4% points since 1990 (from 9.4% to 13.2%).

• Both mortality and infant mortality rates have decreased in Brooklyn since 1990, and both are slightly less than the rates for New York City, New York State and the United States.
• Although HIV/AIDS reported diagnoses and deaths have declined in Brooklyn since 2002, approximately 90% of new diagnoses and deaths are for persons of color, who by racial category make up just over 60% of Brooklyn’s population.

• Felony crime rates (which include property plus violent crime rates) are approximately 1/5 of what they were in 1990, but they are still slightly higher than those for New York City as a whole.
• In 2009, nearly 3,000 adults from Brooklyn were admitted to prison, at a projected cost of over $300 million over the term of their sentences.

• There are over 700 arts and culture organizations in Brooklyn.
• Nearly $9,000,000 was granted to approximately 40% of the arts and culture organizations in Brooklyn by two New York State and New York City agencies. That’s approximately $3.50 per person, compared with over $6.00 per person in funding when considering all of New York City.

• Just over 4% of campaign donations for the 2009 New York City elections came from Brooklynites, compared to over 85% from the other four boroughs combined.
• Brooklyn has more block parties, street festivals, and street clean-ups than any other borough.

Brooklyn Community Foundation's mission is to improve the lives of people in Brooklyn by strengthening communities through local giving, grantmaking and community service. The first and only one of its kind in Brooklyn, the Community Foundation was founded in 2009 to support the borough's most effective nonprofits in five Field of Interest Funds: Arts for All, Caring Neighbors, Community Development, Education and Youth Achievement, and Green Communities. Due to legacy support from Independence Community Bank, 100% of all tax deductible donations to the Brooklyn Community Foundation go directly back to the community. Learn more at: www.BrooklynCommunityFoundation.org; follow at www.Twitter.com/DoGoodBklyn; and like at www.Facebook.com/DoGoodBklyn.

About Center for the Study of Brooklyn at Brooklyn College

The Center for the Study of Brooklyn at Brooklyn College is the only research center devoted exclusively to the study of public affairs in the borough. The Center provides access to and produces critically relevant data and research about Brooklyn and its neighborhoods. We facilitate strategic planning initiatives, and community assets and needs assessments for and with our community partners. It is our vision that Brooklyn-based community groups and institutions, local government and businesses, and research and media are well equipped with timely, accurate and neighborhood-level data in order to make the most informed public policy, programming and funding decisions possible. Please visit our website at www.studybrooklyn.org for more information.